What is a cataract?

Side view of an eye with a cataract: 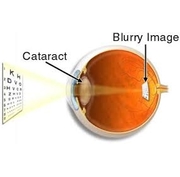 what is cataract? A cataract is an opaque spot on the lens of the eye that you can’t see through. The lens lies behind the iris and the pupil, and works like a camera lens.

It focuses light onto the retina at the back of the eye, where an image is recorded. The lens also adjusts the eye’s focus, which allows you to see things clearly, up close and far away.

The lens is made of mostly water and protein. But as we age, some of the protein may clump together and start to cloud a small area of the lens. This is a cataract. Over time, the cataract may grow larger and cloud more of the lens, making it harder to see.

The haze can vary in size, density, and location, which means its effect on your vision will also vary. At first, many people experience an overall reduction in their vision; they may need more light to read by, or may have difficulty reading street signs while driving.

A cataract can also affect depth perception, which is particularly dangerous for the elderly who are more prone to falling. Common symptoms of cataracts include:
♦  Cloudy, fuzzy, foggy, or filmy vision
♦  Changes in the way you see colors
♦  Problems driving at night because headlights seem too bright
♦  Problems with glare from lamps or the sun
♦  Frequent changes in your eyeglass prescription
♦  Double vision
♦  Better near vision (temporarily in farsighted people only)
Note: These symptoms also can be signs of other eye problems.

Researchers suspect there are several causes:

Free Radicals—natural by-products of metabolism—are highly reactive chemicals that cause oxidation, which in turn causes aging physical injury to the vertebrae or neck, or any stress which reduces eye movement and increases muscle tension toxins, pharmaceutical drugs, and smoking diabetes (high levels of sugar in the blood contribute to cataract formation.

So it’s not surprising that diabetics are three to four times more likely to have cataracts) the protein in the lens changes from the wear and tear it takes over the years, and hardens and loses its ability to focus

Age-related Macular Degeneration (AMD) is most common in people over 50, but can appear as early as age 40. As life expectancy increases, the disease is becoming a significant problem with thousands of people being diagnosed each year.

Millions of American seniors experience blurred or distorted vision from macular degeneration, which can put an end to activities such as reading and driving. In fact, age-related macular degeneration affects one in three people over the age of 75 and is the leading cause of irreversible blindness among adults.

“In fact, age-related macular degeneration affects one in three people over the age of 75 and is the leading cause of irreversible blindness among adults.”

What is the macula?

The macula—about the size of a pencil eraser—is a tiny, yellowish area near the center of the retina that allows you to clearly distinguish fine detail.

7 Facts About Cataracts You Need To Know

What is Cataract? Globally, cataracts are the leading cause of blindness, accounting for no less than 51% of all cases of world blindness which represents at least 20 million people.

Furthermore, it is rather unfortunate that about 54 million individuals, majority of whom are in developing countries suffer from moderate to severe visual impairment as a result of cataracts.

But what is a cataract? A cataract refers to non-transparency or clouding of the eye lens leading to loss of vision as it becomes increasingly difficult, if not impossible for light rays from objects in view to pass through the opaque lens before being focused on the retina at the back of the eye.

The lens of the eyes is essentially made of lens protein and water and several factors can cause denaturation of that protein and lead to non-transparent or whitening of the lens much similar to how egg albumin turns white when boiled. Highlighted below are some essential facts you probably never knew about cataracts.

1. Advanced age is the single most important risk factor for cataracts

Age-related or senile cataract accounts for most cases of cataracts. It is estimated that about 50% of people will have a cataract by age 65 years and nearly everybody over 75 years has some cataract.But why is it so?

The natural lens of the eyes is made up of protein fibres arranged in such a way that it is crystal-clear and permits light to pass through. However, with increasing age, these proteins clump together and cloud small areas of the lens making it difficult to see.

2. It is possible to be born with cataracts

Unfortunately, some babies are born with cataracts. This type is referred to as congenital cataracts. It can occur as a result of some infectious conditions in the mother during pregnancy such as rubella, chicken pox, syphilis and cytomegalovirus, among other causes.

What is Cataract – How Does it Spread?

3. Cataracts cannot spread from one eye to the other

Some folks have the erroneous impression that cataracts can spread from one eye to the other.

Scientifically, this is not true.

However, cataracts can affect either or both eyes simultaneously or at different times.

4. Cataracts may manifest in several ways

If you have cataracts, you may notice a whitish area within the black of your eyeball. It’s actually an non-transparent cataractous lens behind the dark iris of the eye.

Other common symptoms include a cloudy or blurry vision which may produce double or multiple images of the same object. Colours may appear faded and a glare is common in which case light sources appear too bright. Sometimes, a halo or rainbow may appear around light sources.

What is Cataract? It has also been shown that blunt trauma to the eyes leads to swelling, thickening and whitening of the lens fibres resulting in cataracts.

Excessive exposure to ultraviolet radiation and steroid use may induce cataracts.

6. Cataract surgery is one of the most perfected surgeries in the world

If you experience significant impairment in vision from cataracts and this interferes with your daily activities, why not opt for a cataract surgery and have the cataractous lens removed and replaced with an intraocular lens?

In well-equipped centres, these procedures have remarkably high success rates and the patient can usually return home on the same day, although he is advised not to drive.

7. You can cut down your risk of cataracts

An individual is less likely to develop cataracts if he avoids risk factors such as excessive drinking, smoking and exposure to ultraviolet light. For instance, by wearing ultraviolet-protective sunglasses, you may slow down the development of cataract.

In the same vein, regular consumption of fruits and vegetables rich in powerful antioxidants like lutein, zeaxanthin as well as vitamins A, C and E may cut down your cataract risk.